Bombing Survivor Gives Gift of Life with Lights for Lifeline 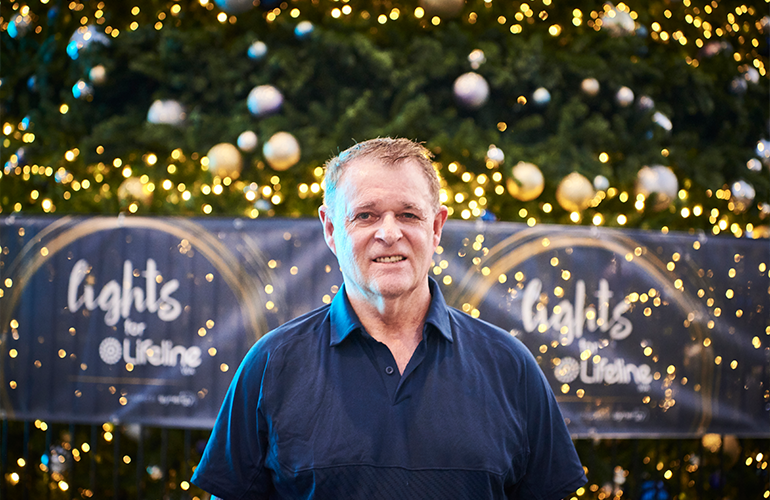 Burswood resident Peter Hughes opened up about being given the gift of life for Lifeline WA’s Lights for Lifeline campaign launch this week.

The Lights for Lifeline – powered by Synergy campaign raises funds for Lifeline WA to answer more calls during the festive season and beyond.

Mr Hughes was among the survivors of the 2002 Bali Bombings, which claimed the lives of 88 Australians.

Attending the event as a Lifeline WA ambassador, Mr Hughes said that although the tragedy caused a great deal of physical and mental trauma, his mental health issues had started years earlier.

“Well before the Bali bombings literally blew apart my world, I knew there was a problem I was dealing with day in day out and that it was some form of depression,” he said.

“As a man, though, I thought it best to keep it to myself and I really didn’t want anyone to know, especially my friends.”

Mr Hughes said the counselling he received in the wake of the bombings showed him the importance of getting help instead of being “tough and getting over it”.

“I was so wrong and spent 20-odd years trying to tough it out,” he said.

“My advice: Get help, get it early and get going to a normal life.”

The Lights for Lifeline campaign officially began with the lighting of WA’s biggest Christmas tree at Yagan Square on November 14.

Lifeline WA CEO Lorna MacGregor said the festive season could be challenging for many people and the tree was a way to remind them that help was available.

“While Christmas is a festive time, it can also be a time of immense stress for people, which can have a negative effect on their mental health and ability to cope,” she said.

“Whatever they are struggling with, we want everyone to know that our crisis call centre volunteers will be there every day of the festive season, including Christmas Day.”

It is adorned with more than 47,000 lights to represent the number of calls from West Australians that Lifeline WA aims to answer by the end of the next financial year.

The 2019 Lights for Lifeline campaign is supported once again by naming rights partner Synergy.

Lifeline WA is extremely grateful for their ongoing support.