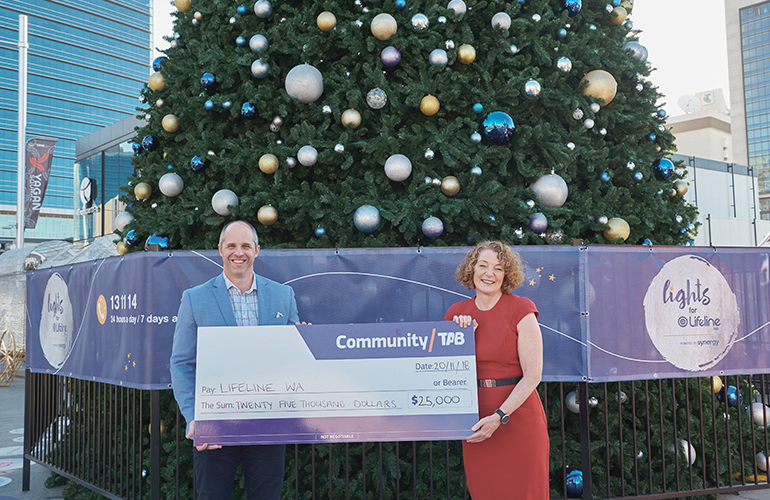 This donation brings Community TAB’s total financial support to the campaign to $225,000 which has provided training for more volunteers for Lifeline WA’s call centre, specifically over the festive season when demand is at its highest.

Lifeline WA Chief Executive Officer Lorna MacGregor said it cost about $4000 for Lifeline to train a new volunteer, and the money donated by Community TAB would be a big help.

“Lifeline WA is planning an urgently needed expansion of its WA operations so that it can answer more of the tens of thousands of calls it receives every year,” she said.

“Currently, Lifeline WA has 178 telephone crisis support volunteers, and we have set a bold target of reaching 288 volunteers in the next 18 months.

“To achieve the expansion, we are planning an intake of 40 volunteers in January next year, and the money donated by Community TAB will allow us to ensure the volunteers get the 170 hours of training they need.”

Racing and Wagering WA Chairman Jeff Ovens said the organisation was pleased to continue such a successful affiliation.

“We firmly believe that Lifeline WA provides an essential service to the community in their hour of need,” he said.

“We are very proud of the fact that our support over the years has gone towards training more than 55 volunteers, and that the money we donate this year will help Lifeline WA achieve its expansion plans.”

Community TAB’s contribution will be recognised alongside WA’s biggest Christmas tree, which has been lit up in Yagan Square.

The Christmas tree is adorned with about 46,000 lights, which represents the number of West Australians who called Lifeline’s crisis call centre in the past year.