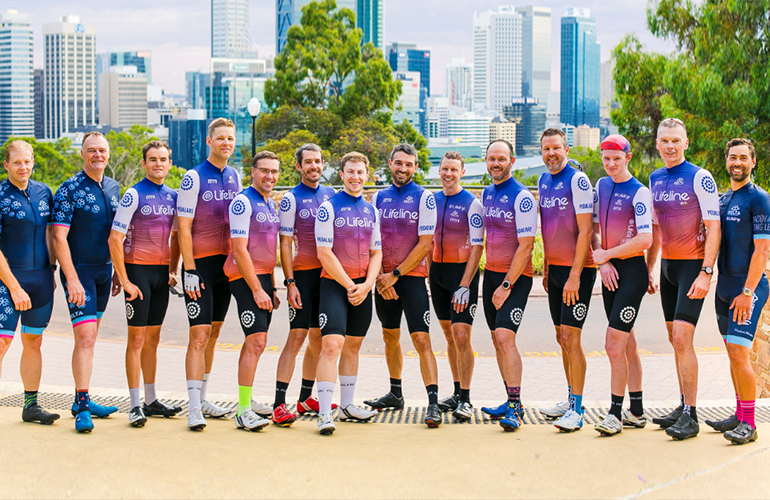 The Perth Dams Challenge is expected to attract more than 2,000 cyclists across three events of varying difficulty – the 2 Dams, 3 Dams and 5 Dams Challenges through the Perth Hills.

The event run by Bicycling WA is celebrating its 10th anniversary this year.

Lifeline WA has been announced as the charity partner for the 53 kilometre 2 Dams Challenge, and for the first time will sponsor a team to participate.

Cyclist Jason Walsh said this would be his group’s first big outing under their new name of Team Lifeline WA.

“We’d been looking to partner with a major event so that we could help raise awareness of Lifeline WA and what they do while doing something we love,” he said.

“Most of us know someone who has gone through a tough time, so we are hoping to make people aware that it’s okay not to be okay and remind them that there is help out there.”

“We will be helping other groups of riders by sitting on the front of the group doing the work as well as providing encouragement and support along the way,” he said.

“We want to make the Dams Challenge better for everyone and encourage more people to participate.”

Lifeline WA CEO Lorna MacGregor said the not-for-profit was grateful to the team for putting in such a big effort to support its vital work.

“More than 46,000 West Australians called Lifeline for help last year, and it’s vitally important that we answer as many of those calls as we can,” she said.

“Fundraising done by groups like Team Lifeline WA enables our crisis supporters to be there to answer more calls for help.

“We are especially supportive of fundraising in this type of event, as the mental health benefits of both exercise and being part of a social group are well documented.”

Mr Walsh said the group had all experienced the benefits of cycling and encouraged others to take up the sport.

“There are so many benefits to cycling - not only physical benefits, but huge mental health benefits,” he said.

“When you’re riding in a group it doesn’t matter what you do, your age, how much you get paid or your looks – it’s about setting a goal and working towards it.”