Inner Ninja Shines Through for Lights for Lifeline 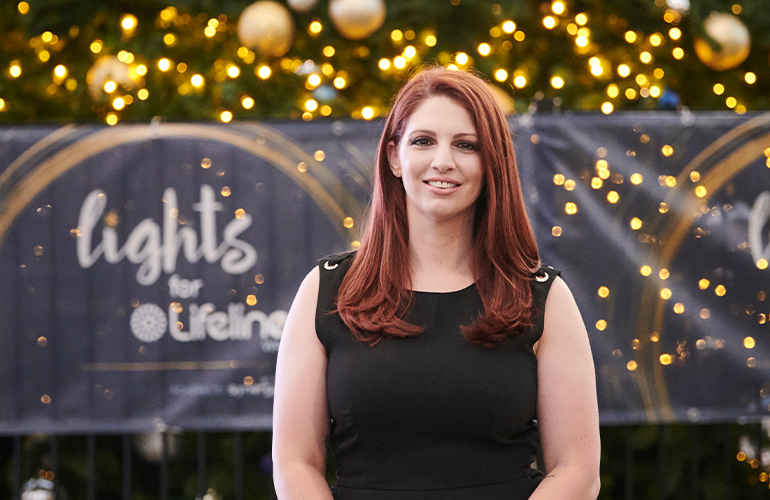 Dianella resident Stefani Caminiti spoke about her inner turmoil and being given the gift of life during a speech at Lifeline WA’s Lights for Lifeline campaign launch this week.

The Lights for Lifeline – powered by Synergy campaign raises funds for Lifeline WA to answer more calls to its crisis call centre during the festive season and beyond.

Ms Caminiti is the founder and CEO of The Inner Ninja Foundation, a charity which uses the voice of lived experience to help people achieve mental wellness.

In her speech, Ms Caminiti shared her story of the mental health challenges she had to overcome alone from a young age before she was able to seek a diagnosis.

“I was scared to speak about it because I didn’t want people to think I was crazy or let my family down, so I wasn’t formally diagnosed until I was 18,” she said.

After being diagnosed with clinical depression, anxiety disorder and mild OCD, Ms Caminiti survived a suicide attempt in 2013, but said this experience inspired her to speak out and encourage others to do the same.

“I realised not being true to myself was killing me and is a massive trigger for my depression and anxiety,” she said.

“For anyone considering suicide please speak out, you are worth it and you aren’t alone.”

The Lights for Lifeline campaign officially began with the lighting of WA’s biggest Christmas tree at Yagan Square on November 14.

Lifeline WA CEO Lorna MacGregor said the festive season could be challenging for many people and the tree was a way to remind them that help was available.

“While Christmas is a festive time, it can also be a time of immense stress for people, which can have a negative effect on their mental health and ability to cope,” she said.

“Whatever they are struggling with, we want everyone to know that our crisis call centre volunteers will be there every day of the festive season, including Christmas Day.”

It is adorned with more than 47,000 lights to represent the number of calls from West Australians that Lifeline WA aims to answer by the end of the next financial year.

The 2019 Lights for Lifeline campaign is supported once again by naming rights partner Synergy.

Lifeline WA is extremely grateful for their ongoing support.