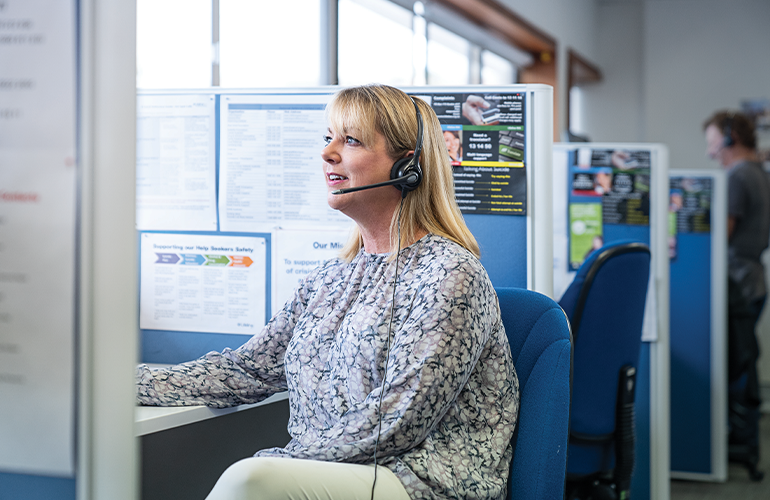 Instead of opening presents, Di Gibson will spend the early hours of Christmas morning volunteering in Lifeline WA’s crisis support centre, helping those who feel they have no one else to turn to.

Di said there was always a spike in calls during the festive season, with more than 28,000 Australians likely to reach out to Lifeline for help this Christmas period.

“As a society we place a lot of importance on Christmas and expectations on people and it can create trauma and stress,” she said.

Lifeline WA is reminding people that its telephone crisis supporters will be on call around the clock, including Christmas Day.

Di said it was the second year in a row she had volunteered to work on Christmas morning, which was ideal timing for her.

“It’s not really giving anything up, because I do my shift in the morning before I see my family,” she said.

“But it’s valuable time so I can commit that time to Lifeline.”

Di urged people to look out for others who might not have anyone there for them over the holidays.

“While most people are celebrating, some people aren’t, so reach out and take a risk to connect with someone who might be lonely,” she said.

Lifeline WA chief executive officer Lorna MacGregor said financial pressures, family problems and alcohol and drug issues could be amplified by the stress of the holidays.

“As well as dealing with extra pressure, often people’s existing supports such as mental health and support services, case workers and psychologists are on leave during the Christmas holidays,” she said.

“This can result in them feeling vulnerable and lonely.

“But we would like to remind everyone that we are here, and encourage anyone who is having a personal crisis or suicidal thoughts to call our telephone crisis centre.”

As part of its Lights for Lifeline campaign to give the gift of life this holiday season, Lifeline WA put up the state’s biggest Christmas tree in Yagan Square.

The Lifeline WA Christmas tree is adorned with 47,000 lights representing the number of calls West Australians make to Lifeline each year, to remind people that help is available.